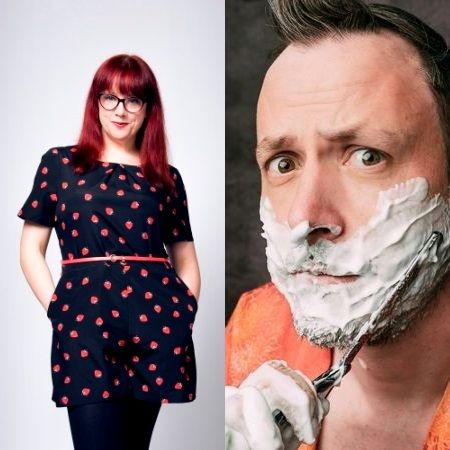 The Tringe continues with previews of the new shows from the brilliant Angela Barnes and Paul Savage.
Don't miss out on what will be a barnstorming gig.

We are so very sorry to announce that the Mighty Kids Beatbox Comedy Show have been forced to postpone due to illness.
The support slot this evening is now being filled by Paul Savage, with a further surprise appearance from a.n.other comedian.

Angela Barnes (Mock The Week, Live at the Apollo, 8 Out of 10 Cats Does Countdown and former chair of BBC Radio 4's The News Quiz) has good intentions but trying to live your best life, as it turns out, is really bloody hard.
Stand-up, stories and jokes from '...a gloriously down-to-earth, straight-talking and extremely funny comic' (Guardian). 'Well thought out, quick-fire one-liners are delivered by a down-to-earth and likeable stage persona' **** (BroadwayBaby.com). 'An extremely entertaining fresh slant' **** (One4Review.co.uk). 'Great punchlines galore' **** (EdFestMag.com)

Having made his comedy debut in 2007 Paul is an established pro on the UK comedy scene. In his years on the circuit, he has just about covered the entire country as well as making time for a tour of english-speaking venues in Norway, Denmark and Sweden. This year he will be taking his seventh solo hour to the Edinburgh Fringe Festival where previous shows have garnered both critical and audience approval.  Over the course of his career Paul has racked up an impressive list of accolades including a nomination for 'Best Full Length Debut Show' at the Leicester Festival, Juice Comedy club's 'Performer of the Year', the West Midlands Comedy Awards 'Most Improved Act' and the West Midlands Comedy Awards 'Best Joke'.