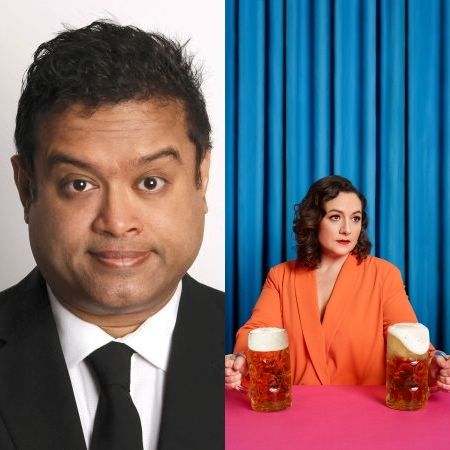 The Tringe continues with previews of the new shows from the brilliant Paul Sinha and Jessica Fostekew.
Two Tring favourites on one wonderful night. What a joy!

In January 2020, Paul embarked on a national tour, his most ambitious show combining stand-up, music, hula-hooping and tales of romantic validation and neurological degeneration. As it turned out 2020 proved to be the wrong year to embark on a national tour. For everyone. Undeterred, Paul returns, with the difficult second post-diagnosis album. Expect jokes and surprises. Paul has a story to tell. And an absolute banger of a title. 'The stories are told with a constant light-touch wit... Parkinson’s hasn’t robbed him of his ability to do stand-up, it’s enhanced it' **** (Chortle.co.uk).

A new show about private things, public things and trying to wrap your big sexy arms around time to keep it still.

You’ve seen Jessica on Live at the Apollo and QI, amongst other telly shows. She’s a regular co-host of The Guilty Feminist Podcast, the host and creator of The Hoovering Podcast and you hear her regularly on BBC Radio 4’s News Quiz and Now Show.

Nominated for the Dave Edinburgh Comedy Award – Best Show 2019 with her last show Hench and winner of Best Show and Best Breakthrough Act in the Chortle Awards 2020.