Russell Kane and the Future Stars of Comedy 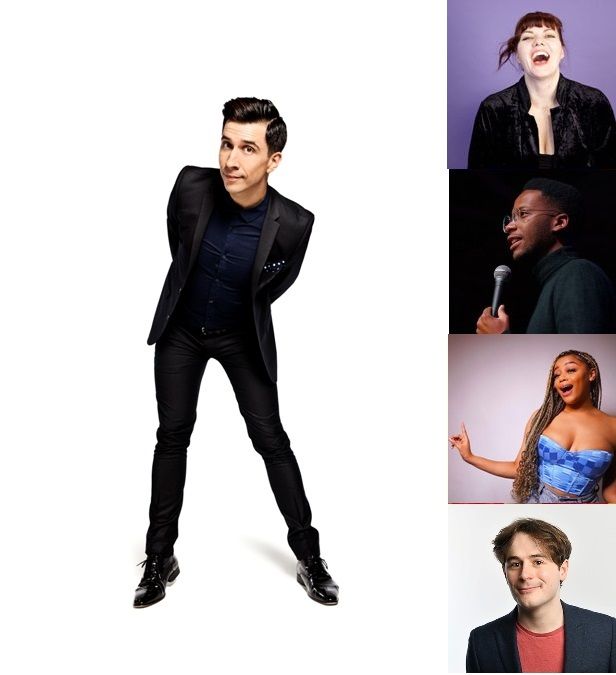 Join Russell Kane as he hosts an evening with some of the best up and coming comedy talent in the country. The Comedians you will see have all been selected for the famous Comedy Reserve or the AAA shows at the Edinburgh Festival.
Expect to have your socks well and truly knocked off.

Packing more energy than a Duracell factory on a nuclear reactor, Russell will give the audience a little tour across some of the finest young talent in the country.

South london born and raised, Kyrah began her comedy career in 2019 during her last year of University. Her rise on the comedy circuit has been impactful, and so far she has managed to secure some impressive gigs at venues such as : Up The Creek, Top Secret Comedy Club, Backyard Comedy Club, Glee Club and was also the support act for White Yardie’s most recent tour.

Alex Kitson is an “on the money funny” award-winning stand-up comedian, performer and writer. New on the comedy scene in 2018 he has performed across the UK, written for both the BBC (‘Incredible... So clever’ - BBC Radio Bristol) and online content with millions of views. He has been on bills alongside Russell Howard, Jon Richardson, Nish Kumar, Seann Walsh, Rosie Jones, Mark Watson, Fin Taylor and Jayde Adams among many others and reached the final of First Laugh 2020, New UK Online Comedian of the Year 2020, and the top 12 of Jason Manford’s New Act Competition in 2019. He also performed in two five star runs at the Edinburgh Fringe with the Bristol Revunions (‘The entire ensemble is hilarious. Properly, effortlessly, hilarious’ - EdFringe Review). In 2021 after the pandemic he took his first hour of stand-up around the country to critical acclaim in Southampton, Brighton, Exeter, Bath and Bristol. Culminating in a sell-out show in Bristol and winning the Bath Comedy Festival Award for Best Joke 2021. In 2022 he was a Finalist in Bath New Act of the Year, was selected to host the prestigious AAA Showcase in the Pleasance Courtyard in Edinburgh and began regularly closing smaller gigs in the West Country. He also hosts and runs ‘This Next Act’ a series of weekly comedy nights in Central Bristol, and is the resident MC of several other comedy clubs and nights around the South West.

Billed as one of the country's top new comedy acts” by The York Press, Tadiwa Mahlunge has performed at the Greenman, Brighton Comedy Garden, Camp Wildfire, Aberystwyth and Greenwich Comedy Festivals - alongside the biggest names in comedy -providing tour support for Kiri Pritchard-McLain, and TV warm up for Desiree Burch’s Amazon Prime special.

Tad has performed at historic venues such as The Clapham Grand, The Greenwich Maritime Museum, The Old Vic (Bristol), The National Gallery and of course, he's a regular at the Comedy Store.

Tad was born in Zimbabwe before growing up in Cardiff. After spending his whole life in two colonies, it's a bummer for him to now call London home. When his plans to have a career as a professional physicist were dashed, after he was told he would never make the grades for Oxbridge, his obvious second choice was standup.

“VERY BLOODY FUNNY. AND NEITHER TOO TALL NOR TOO SHORT, WHICH IS GREAT.” - Aisling Bea

Claire Haus is a stand-up and sketch comic, writer and actress based in London, England.

She features on ITV2’s Stand Up Sketch Show. Her 2021 collaboration with LADbible reached 700k+ views in just four days and she’s a So You Think You’re Funny grand finalist.

She can regularly be seen performing high-energy stand-up at some of the best clubs on the London circuit. She also creates a stream of popular sketch content on Instagram. Time Out London named her one of the top four comics to follow online.

“One of the smartest, funniest sketch comedians.” -Time Out London